Haley was pregnant again.  It was her second crisis pregnancy in three months. The first pregnancy ended in abortion. She knew she didn’t want another child—she already had two little ones she could barely handle.  But, she also knew that her previous abortion gave her nightmares. When she closed her eyes she was haunted by the sound of the surgical vacuum and the loss of what had been taken from her.

At wits end, Haley called the same abortion clinic hoping that someone there would be willing to talk her through her decision.  She was curtly informed on the phone that the abortion facility didn’t have time to give her advice, just “a price and an appointment.”  She made the appointment. 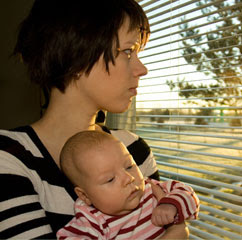 Still conflicted about her decision Haley told a friend about her situation, and her friend suggested First Care.  At the First Care clinic, Haley found what she was looking for:  someone to listen, someone to care.  After receiving options counseling, prayer and an ultrasound Haley called the abortion clinic and cancelled her appointment.  She chose life for her unborn child.

It is truly a blessing that women like Haley have a place to go where the taking of a human life isn’t viewed as a commercial transaction. Her appointment at First Care was free, but the decision she made was priceless.