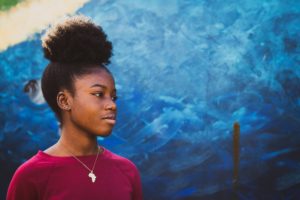 Tamara hadn’t been feeling well lately. As a high school track athlete at the peak of the season, she was frustrated about having to interrupt her practice sprints to throw up or to miss practice altogether because she was so tired. For her, it was just another hurdle… she just didn’t think that the cause would be pregnancy.

Tamara, a junior, had been dating Miles, a senior, for about 10 months when she found out she was pregnant. They initially bonded over the fact that they were both student-athletes and had similar home lives. Both Miles and Tamara were raised by young, single mothers, never knowing their fathers, and had a multitude of younger siblings at home.

After experiencing what it was like to be raised by a young mom and having to constantly take care of her younger siblings, Tamara already felt the weight of the world was on her shoulders. She knew that if she really was pregnant, she couldn’t keep the baby. When she told Miles, he had similar feelings. Miles was headed to community college after graduation. He would be living at home and working part-time when he wasn’t in school. Tamara still had a full year of high school left and was worried about what the future would hold. Together, they decided abortion was the only way out of this situation.

Tamara sat amongst a pile of school books and homework as she scrolled through her phone, trying to find more information on abortion. Truthfully, she didn’t know anything about abortion. She didn’t even know how it worked. Among the Google Search results, Tamara found First Care. When she found out that she didn’t need to tell her parents about her appointment and that they would give her a free pregnancy test and ultrasound, while giving her information about abortion, she was intrigued. Tamara definitely had some trust issues, so talking to a bunch of adults about her body made her skeptical. But, she needed to know what she was getting herself into… and fast – before she started showing.

Miles came with Tamara to her appointment after school one day. During the appointment, the staff at First Care was able to confirm her pregnancy and let her know that she was already 11 weeks pregnant. She did not want to see her ultrasound. Both Miles and Tamara talked to our staff about abortion and all their options. They were both fairly closed off and hesitant to really open up about how they felt about the situation. However, they both mentioned how kind and supportive our staff was and they appreciate the help they had been given.

When they left, we weren’t sure what was next for the young couple. We prayed, hoping that God would touch Tamara’s heart and guide her toward choosing life for her baby.

A week later, a First Care staff member reached out to Tamara to follow up. During that phone call, we learned that Tamara and Miles ended up telling their families about the pregnancy. Both mothers were disappointed at first, not wanting them to experience the same type of life that they had to offer their own children, but they promised to support them throughout the pregnancy.

Additionally, Tamara decided that her baby did deserve a better life than what she could give him or her. We learned that she and her mother had contacted an adoption agency. They had a meeting at the end of the week. Her school also has a program to help teens who are pregnant finish their coursework, so she told us that she would be working with the teacher that runs the program to ensure that she can get her high school diploma and return to track for her senior year. She and Miles are still together.

At first, we were unsure of what Tamara would choose for her unplanned pregnancy. However, through the power of prayer, the services we offer and our highly-trained, compassionate staff members, we were able to help guide Tamara and Miles in making this life decision. If you would like to learn more about what we do to help couples like Tamara and Miles, click here.